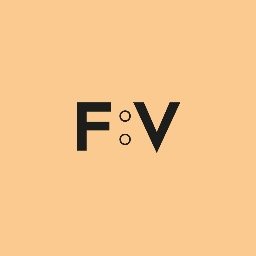 Muggle Quidditch is a complicated game. Why can’t everybody just play cricket or something? Throw ball, hit ball. It’s that simple.

Unruly kids, in general, and parents of the unruly kids who failed to teach them to be disciplined and not to ruin what isn’t theirs. Who is the worst guest you have had in your house and what did they do?

If Shilpa is still single in 2021 (and assuming so am I), I’m gonna ask her to marry me. I’m just kidding. Or am I? (Who is Shilpa, you ask? For more details, read The Curious Case of Shilpamma)

The Gerua song was shot entirely in Iceland! Both those videos contain some spectacular background shots. Everybody thought it was green screen until they released the making video. And then they were like “Damn“. I like the making video more than the final music video because it shows the actual chemistry between SRK and Kajol, the most successful on-screen romantic pair ever. They are so adorable.

Today was Ayudha pooja festival back home. According to Wikipedia, it is means the “worship of Instruments” or the “veneration of implements, machines, weapons, books and musical instruments”.

“Apart from various types of equipment; it is on this occasion when weapons are worshipped by soldiers and tools are revered by artisans. The Puja is considered a meaningful custom, which focuses specific attention to one’s profession and its related tools and connotes that a divine force is working behind it to perform well and for getting the proper reward.” 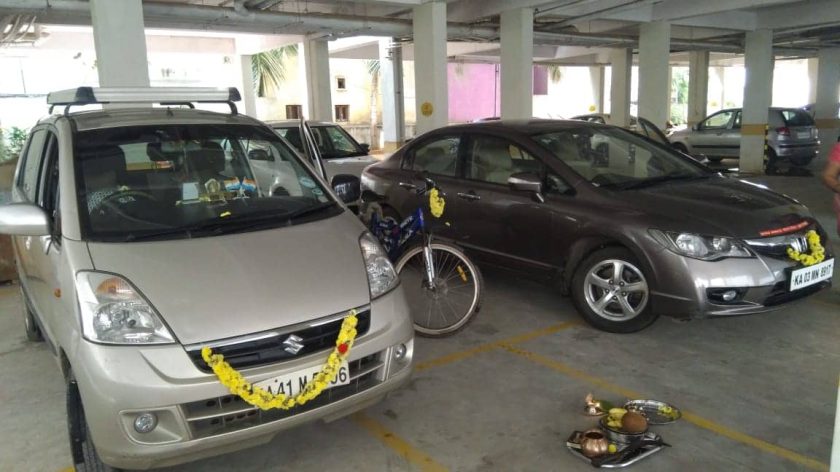 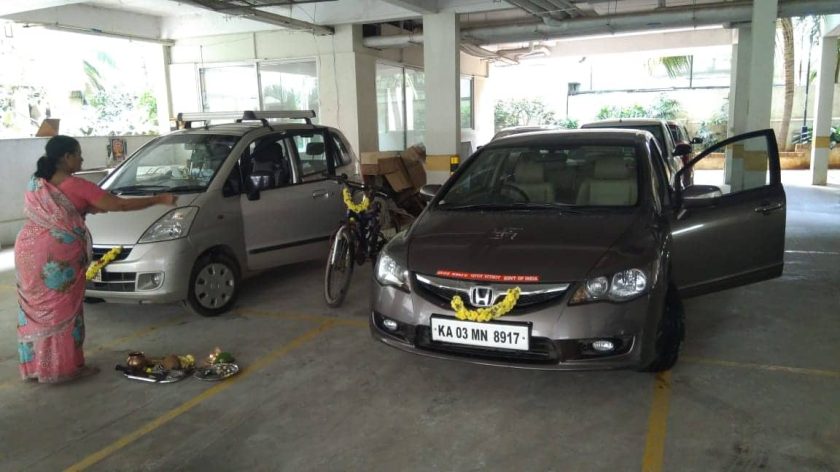 I like the tradition. Basically, everybody worships the tools of their trade or profession, hoping that it serves them well in the coming year. When we were younger, our mum used to make us worship our school textbooks (because they were our tools, fair enough). She’s a housewife, so she does it to every home appliance we have, including washing machine, stove, refrigerator… everything, because those are her tools. I missed my second Ayudha Pooja in a row, since I moved to Germany last year. So my mum does it on my behalf as well. My “tools” for this year’s Pooja were the car, my bicycle and the MiG-23 model I got from Nathula. If I were there, my laptop would get a Swastika and a flower offering as well.

I have the model as my wallpaper, so I look at it every time I turn my computer on. In our culture, we kinda believe that God is everywhere and in everything, so you can practically pick up any object and use it as a symbol of the divine. To me, worship is just closing my eyes and saying a silent prayer. I don’t address anybody in particular, I just put it out there. But I get what you mean. Spirituality is an individual thing. To each their own. I do have a favourite God though, and he is badass.

Have you heard of Hanuman? He is not technically a God but more like an avatar. He is considered to be the 11th avatar of Lord Shiva. He is viewed as the ideal combination of strength, heroic initiative and assertive excellence (Shakti), and loving, emotional devotion to his personal god Rama (Bhakti). He has also been the patron god of martial arts such as wrestling, acrobatics, as well as meditation and diligent scholarship. He symbolizes the human excellences of inner self-control, faith and service to a cause, hidden behind the first impressions of a being who looks like a monkey. (Source: Wikipedia)

“What does avatar mean?”, asks Val.

Okay, God is like a force field, right? You cannot see, hear, smell or touch God. We kinda assume they are in “heaven” or whatever. But in mythology, God has occasionally manifested in a bodily form to walk on Earth. We call it an avatar. (Yes, hence the title of that epic movie too). For example, Vishnu has had 10 avatars. The first four were fish, tortoise, boar and lion. The next 6 were human. Buddha is believed to be the 9th avatar, but he has his own religion now.

Anyway. Hanuman is the 11th avatar of Shiva, and he was born around the 7th avatar of Lord Vishnu (Rama), and having been granted immortality, has lived on ever since. Apparently, there are seven immortal living beings in Hinduism who are to remain alive on Earth until the end of the world, according to Google.

“Immortality seems more like a curse to me. I wouldn’t want it”, says Val.

True. In the Mahabharata, Ashwattama cheated (I do not know the details) and was cursed with 3000 years on Earth, “that he will roam in the forests with blood and puss oozing out of his injuries and cry for death. Since he had no fear of death during war, death would not meet him. He will have neither any hospitality nor any accommodation; he will be in total isolation without any contact of physical communication from mankind and society. The wound caused on his forehead will not heal and his body will suffer from a host of incurable diseases forming sores and ulcers that would never heal for 3000 years.” (Source: Wikipedia)

I went to Decathlon at Kerkrade in the morning. I would love to watch a football game at the Parkstad Stadion someday, the home of Roda JC. Decathlon opens at 9:30, I was there by 8:50. I had to sit out in the cold for 40 minutes. The moment the doors opened, I rushed to the washroom because I had to urinate.

I also decided to invest in a scooter, or cityroller, or whatever you may want to call it. I found one for cheap on eBay but the address was two and a half hours away by train. It folds! I rode it until the railway station. It was fun! It even fit in the overhead luggage compartment! Can you tell how excited I am right now? I was actually looking for roller skates because I am used to it (I used to be a member of the Mangalore Roller Skating Club when I was a kid), but it involves changing shoes before leaving and after reaching. When I found this on eBay, I figured this was more convenient. I have never used a scooter. I had a bicycle. So this is going to be a first. Indian footpaths aren’t safe for small transport like scooters and skates. we don’t see much of it around.

What should I name it? Back when I was in high school, and was freshly hooked onto Harry Potter (this was the gap between the 4th and 5th book release), I made a nameplate for my bicycle, and called it Firebolt, haha. I wish I had a cape. Then I could go to class at 8 in the morning, screaming “I BELIEVE I CAN FLY“.

Going from friendship to dating is really tricky. I ruined a friendship or two like that. Now we blocked on social media, haha. It is kinda awkward when you have, like, 80 mutual friends (we were in the same class in engineering). It ruins the social circle as well. I can’t go if she’s there and blah blah. Eventually I stopped getting together altogether and made new friends. It’s India, there is never a dearth of new people to befriend. It was probably my fault it ended the way it did. What can I say, I used to be a jerk. I have my flaws, which I continuously address and work on. I may have said or done things in the past I wouldn’t be proud of if I were to look back today. But that’s life, I wouldn’t be the person I am today if I hadn’t made those mistakes and learnt from them.

I never felt the need to remember the value of Π to more than 9 decimal places. That is enough for all practical purposes. But kudos to those who train their memory though. Amazing.

We are going behind an hour in about 10 days. Daylight savings time again.

When Canadians get high, do they argue over who’s more sorry? In related news, Canada is nearly out of weed only two days after legalising cannabis. (Source: JOE.ie)

RCB decided to sell Quinton de Kock to MI. That is one South African less in the team.

Val says, “They need to replace him with a bowler.”

That they do. RCB’s bowling sucks. It has traditionally sucked, for the most part of the club’s brief history, the reason why despite having some of the best players in the world playing for them, their trophy cabinet is completely empty. The other reason being they are a bunch of chokers.

It hurts to be a RCB fan. It hurts so bad. Now I know how people close to me feel when they see me underperforming in life. I am so sorry.

My mum thinks she be subtle but she be so obvious. Today she’s like, “I was going through my saris and I don’t have that many good ones so I need to save them for special occasions like your wedding“, and I’m like “real smooth mom“, haha.

I bought 5 sweatshirts for €40 (hence the title of this post) at C&A today, because they were on a clearance sale. I really should not be allowed to shop. Now I am drunk on 500 ml of lemon beer with 2.5% alcohol. I think I am just going to sleep. 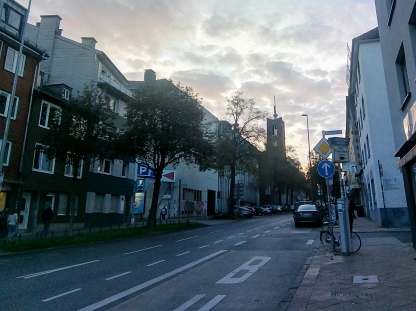 Wow, I did not know Instagram filters were capable of beautifying a picture this well. Technology, man. Yet we cannot seem to stop ourselves from feeding plastic to sea animals. Humanity’s priorities.

I am on steam too, but I have no idea why. I don’t play games. Well, I used to play Dragon Mania Legends and Asphalt 8 on Xbox. I played 200 hours of DML before my brain decided that is not how I want to spend my days. 200 hours in a month is a lot.

I went out and bought some supplies today- a broom, a belt and 10 coat hangers. I have  already overspent by a margin this month. I also accompanied Sunish, who is moving to Stuttgart tomorrow. He needed help with hauling his bags. We had my lunch at an Indian restaurant called Chutney in Aquis Plaza. The last time we went there a year ago, I had struggled to finish my Chicken Curry. Today I had Beef Curry and Mango Lassi. Then I had headache so I came home and slept for an hour. That is all I did today. I was awake until 4 am last night, I don’t want to repeat that, so I also kinda want to sleep early tonight. And I have to make dinner now. My life is a mess.

Nothing is in order anymore.

The government needs to hire me for their Planning Commission. I will make all the plans to save the world, but I cannot act on them to save my own life.

It is that time of the year when the silly Aussies get to show off their weather, because it is summer there, oh mah gawd so wow. *sarcasm*

Rhi says, “Diwali is coming up soon, isn’t it? We have a large population of Indians in my suburb, so a few houses have lights for nearly two months (Diwali, then Christmas)”

That is what most people do in India as well. The lights go up on Diwali (7 November this year) and hang until Christmas!