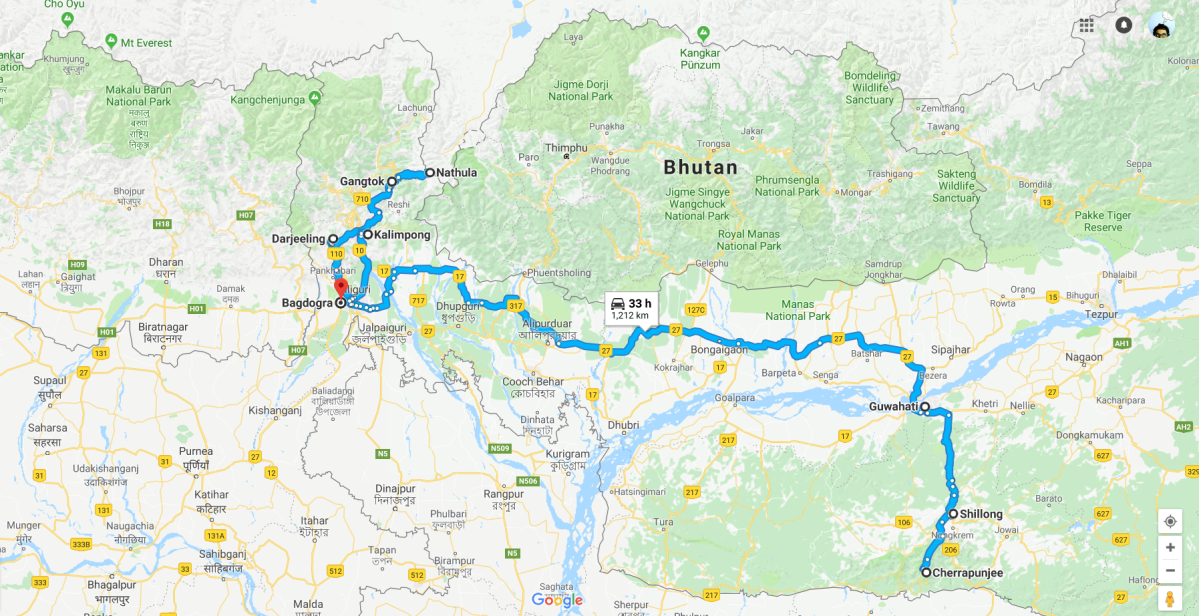 Michael Kennedy: “I learn something every time I go into the mountains.”

Day 2 of the trip. Assam and Meghalaya.

0846 h: We visited the Kamakhya Temple in the morning.

1253 h: Checked out of Hotel Rajmahal. We will be back in two days, Assam. For now, it is Meghalaya time!

1951 h: That was a long drive. We had lunch at Jiva on the way. Checked into the Blueberry Inn in Shillong. This inn is probably from the time the British used this place as a hill station. Shillong is the capital of Meghalaya. Meghalaya is the country’s rainfall state. Tomorrow, we will be travelling to Cherrapunji, which is the wettest place on the planet. It receives the highest annual rainfall in the world. Megha = cloud, Alaya = mountain. Hence, Meghalaya = mountains in the clouds.

Day 3 of the trip. Meghalaya.

0926 h: Shillong peak! A picnic spot, 10 km from the city, 1966 m above sea level, offers a panoramic view of the scenic countryside and is the highest point in the state. Obeisance is paid to U Shulong at the sanctum sanctorum at the peak’s summit every springtime, by the religious priest of Mylliem State.

1034 h: The clouds cleared, so we stopped to take pictures of the East Khasi hills.

1131 h: Cherrapunjee! Or as the locals call it, Sherapunjee! The cave trail was an amazing experience. I don’t think I have ever been inside a cave before. It was so much fun! We took the pleasant walk, because ain’t no Novi soiling his clothes.

1250 h: The Seven Sisters Falls (Nohsngithiang Falls) was a no-show. We could not see anything, but only hear the sound of the water splashing down the hills.

1334 h: Mawsmai Nongthymmai Eco Park. Again, the Bangladesh border was a no-show because of clouds. But the walk through the clouds was a one-of-a-kind experience.

1942 h: Back at the Blueberry Inn. We stopped at another falls on the way back. It was redemption for all the missed sights due to clouds throughout the day. The view was beautiful. I think the iPad captured it best, compared to the Nokia 3, Nokia 6 and the Nikon L340.

Fun day, all in all. We drove through the clouds, on the way to Cherrapunji (the place that receives the heaviest annual rainfall in the world, locals call it sherapunji, meaning claw of the tiger). They weren’t kidding when they named the state Meghalaya (mountains in the clouds). You can literally stick your hand out and touch the clouds. I have been to several Himalayan states (Jammu & Kashmir, Himachal, Uttarakhand, Assam, Meghalaya, West Bengal, Sikkim, even Nepal, it’s long mountain range) but the mountains were never the same kind in every place, every part of the Himalayas is different yet so beautiful!

Also, the military presence is heavy here, because this region borders Nepal, Bhutan, Bangladesh and Myanmar. Photography isn’t allowed at all places. The mountain people (we call them pahadi), the locals here, are so cute and so small, and always smiling. The kids are obviously the cutest little things, with those apple-shaped cheeks and small eyes.

What has been that one thing that has gotten me through tough days? I would say my resilience to not give up, and something Minerva McGonagall would call “sheer dumb luck”.

Google had a cute doodle for Teacher’s Day 2018.

Day 4 of the trip. Meghalaya, Assam and West Bengal.

0810 h: Umiam Lake. We didn’t get to see the lake two days ago due to rain and clouds. We were lucky today. Bright and sunny and beautiful.

1040 h: Drive up the Sohpetbneng was a fail. The peak was apparently 6 km up, but we gave up 3 or 4 km into the trail. The road was too “off-road” to keep going. It is the navel of heaven, where once grew a botanical bridge – umbilical cord, rather – for mortals to communicate between earth and God’s abode in the sky. That, as the story goes, was before the bridge snapped following a sin-induced catastrophe.

1508 h: That was the shortest flight (347 km, 49 minutes) I have ever been on. Landed safely at Bagdogra Airport. Driving up to Darjeeling for the rest of the day.

We started the day in Meghalaya, took off from Assam, and landed in West Bengal. Tomorrow, we wake up at 0200 h to drive to a point from where we will be able to see the sun rise from behind the Kanchenjunga (8,586 m), India’s highest peak, and third highest peak in the world! Fingers crossed for a clear sky.

0316 h: Leaving to see the sunrise and the Kangchenjunga. It rained all night. I really hope we get to see something.

0518 h: Sunrise. Heavy cloud and fog. We could barely see beyond a few hundred metres. No sunrise for us.

0703 h: Batasia Loop. Also stopped at a Buddhist monastery on the way here. The sky has cleared just enough to give us a glimpse of Mt. Kanchenjunga and the other snow-covered peaks. The war memorial of the Gurkha regiment formed a pretty frontdrop (opposite of backdrop?) in the frame. We got lucky, because by the time we left at 0733 h, the sky had covered itself in clouds again, and it had begun to rain.

0810 h: Rock Garden, Darjeeling! Nothing too fancy, after all the sights we have already been seeing. The falls is pretty but that is pretty much it. We roamed for around 40 minutes before retiring for some breakfast time.

1015 h: We stopped at a tea garden in Upper Bhutia Busty, and a rock named after Sherpa Tenzing Norgay. Still raining. But the Kanchenjunga was out of the clouds again.

1250 h: Back at Classic Guest House for a quick nap. We are done sightseeing for the day.

1528 h: Had something to eat,  and proceeded to the Darjeeling branch of Vijaya Bank.

In other news, India decriminalised section 377. The early morning drive up to the top through the cloud and fog was super dangerous. It was only when the clouds cleared, I realised how shit scary it was.

Just this morning, we were reminiscing all the family trips we had since childhood. The common sentiment was back then you wanted to take in all the sights, now we observed people only look for the spots from where they get the best pictures/selfies. They are more interested in that than actually enjoying the view in the moment. Nobody goes back and looks at all those pictures again.

Personally, I prefer being told the hard truth even if it hurts my ego in the short run. I take self improvement very seriously. But, on the contrary, I am somebody who is non-confrontational, so I will go the high diplomacy route. But I do make my disappointment known at least, if I have been let down. That is the most confrontation someone will get from me. For example, I don’t mind when my flatmate criticises me for something, even if I feel bad in the moment, but I never return the favour, even though I know he will take it in the right spirit too. Communication and transparency is always the best way forward. That’s one of my weaknesses I am still working on.

Day 6 of the trip. West Bengal and Sikkim.

0949 h: Stopped for tea and breakfast on the way. You know you are approaching the border when you see more military personnel than civilians in the villages along the way.

1100 h: Lovers Meet Viewpoint, which is really a sangam of two rivers, down in the valley. We ran into a Goan-speaking Konkani family there.

1443 h: Local sightseeing around Gangtok. We started with Hanuman Tok, which is maintained by the Indian Army.

1512 h: Ganesh Tok, and momo+tea break. Then, we proceeded to a flower exhibition. That is all there is to see in Gangtok in half a day, apparently.

I look for these numbers without realising it. Like, suppose the volume of the TV is 14 and somebody asks me to increase volume, I will take it to 21. Until I get shouted at, then I will settle for 17 (at least it ends with 7). My OCD with numbers is not out of control though. I try to be as rational as possible (“See what I did there?“) while staying loyal to my numbers.

I love the scares, but horror movies should be genuine, with their storytelling, and very few are. Most average horror movies use sound and lighting to induce fake jump scare moments that gets boring after a while. The Ring series was decent. Real horror is what lives with you after you watched the movie. The Exorcist was a trendsetter. The Ring was good too. The Others, The Orphan, Triangle, Dead Silence… They’re all good. The Orphan was creepy horror. No paranormal, more psychological. Extremely creepy.

2 thoughts on “Encounters With The Roof Of The World”