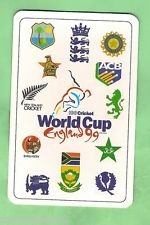 It was the time when most of the national teams really blossomed. The gap between them was minimal when compared to now or before the 90s. It led to a lot of close contests, and one-sided contests were very rare.

Teams like Australia, England, India, New Zealand, Pakistan and West Indies were already quite good. But it was also the era when a few other teams also upped their playing standards.

South Africa made their official comeback to international cricket in the 1991-92 season. They already had a good side. They proved it by winning the 1998 ICC Champions Trophy, and since then have maintained their top notch quality. They had players like Keppler Wessels, Dave Richardson, Daryll Cullinan, Nicky Boje, Jacques Kallis, Mark Boucher, Neil McKenzie, Boeta Dipenaar, Lance Klusener, Gary Kirsten, Shaun Pollock, Jonty Rhodes, Allan Donald, Makhaya Ntini, Hansie Cronje and Herschelle Gibbs in the 90s.

Kenya was another team that shined in the 90s. From being a part of East Africa that played in the 1979 World Cup to hosting the 2000 ICC Champions Trophy and eventually making it to the World Cup Semifinals in 2003, they were one of the exciting teams from Africa. Thomas Odoyo, Steve Tikolo, Hitesh Modi, Maurice Odumbe, Martin Suji, Tony Suji, Ravindu Shah, Kennedy Otieno, Peter Ongondo, Collins Obuya, David Obuya and Joseph Angara were some of their best ODI cricketers.

Canada, Ireland, Namibia, Netherlands, Scotland and UAE were some of the other sides that also caught the cricketing world’s attention in the 90s.

In fact, if you take a look at all the ICC World Cups, the 1999 edition held in England remains one of the most closely contested World Cups in cricket history. There were no pushovers, no easy victories. Nearly all the games were exciting contests.