We have watched so much of Sachin Tendulkar since 1989, the way he saved his team like a Superman on countless occasions, anything different is definitely going to be less.

But that is not true. The kind of fluidity and footwork that was in Tendulkar’s batting was also displayed by some of his contemporaries (Azharuddin, Laxman, Sehwag, and Yuvraj in recent times) but it was Tendulkar who delivered more consistently and when it mattered.

We are so used to watching him bat, with his small build and seemingly over-sized bat and pads. We have grown up emulating and imitating his shots. That is why nothing else will do.

Watch this and tell me, is there a batsman who could have played that shot any better?

Even though he was capable off hitting the ball to all parts of the ground, it is this one shot that brought Sachin Tendulkar a lot of runs, and consistently as well. If you take a look at the wagon wheel of a typical Tendulkar innings, you will see at least 50% boundaries in the region square of the wicket on the leg side, and nearly all of them (especially against pace bowlers) would be the flick/glance off the pads.

Notice that dark blue region there? That one. Nobody (except maybe Sehwag?) could play this shot with such precision and timing, and at will as the Little Master. He had the ability to find the gap even with two fielders around square leg, inside the circle or in the deep. 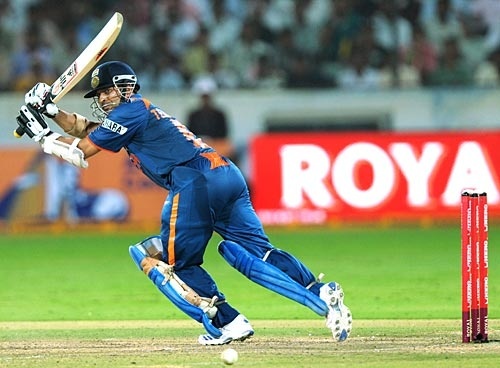 It is not an easy shot to play, mind you. If you miss it, you are surely going to run the risk of being out lbw. Such was Tendulkar’s accuracy and class.

Sachin Tendulkar hit 2,377 fours in limited overs cricket, and I wouldn’t be too surprised if more than 1,000 of them were from playing this shot.

What is the best picture of Sachin Tendulkar I have ever come across?

This one. He’s not even in the frame yet. But the sheer excitement and anticipation to see him walk out to bat is so palpable, it still gives me goosebumps.