A dorm of exactly 42 active members at any point of time, who are divided into 6 Quidditch teams of 7 members each. The teams compete for the L42 Quidditch Cup (awarded at the end of every month), based on House points earned during the month. The dorm boasts of its own crest and website (complete with forums for discussions), Facebook, Twitter and Plug.dj music room.

Started on 23rd April 2014, The League of 42 has contributed 83,627 points for Ravenclaw House (as of 11 February, 2015). The dorm is closed unless there are less than 42 members. If any Ravenclaw wishes to be part of L42, they should owl the dorm leader. This dorm has 42 members and is currently closed.

The Dorm was started on 23rd April 2014 at 7:33pm IST. In those days, one was allocated a dorm by default upon signing up. The default member limit for a dorm was 5, unless the dorm leader chose to remove/add members. So 5 people signing up around the same time were put in a dorm and the first person became the leader. That is how the algorithm went. Every 5th person to join Hogwarts is Here got to become a dorm leader of a new dorm by default. So, Novellus was put up in dorm #15,991 and by some stroke of luck, he was the dorm leader too, because he was the first person in #15,991. One other person joined soon after, and by the time he had completed his profile and explored the site, 3 more had joined and the dorm was “full”. By full, it means the next few people to join went to #15,992 and so on, unless the dorm leader removed someone from their dorm.

Unfortunately, not much is known of the first dorm members. There was a British girl called Iona Fleming. This was a time when the site still had the old interface, ran on a single server and glitched all over the place (Hogwarts even had a secret fifth House because of the glitches, called Boudwin House – the House of Ghosts). Many students still remember those days, fondly. The site was full of promise. Thousands of people joined every day.

Novellus decided 5 was too less a number, so he kept the dorm open. He was never interested in doing courses, he was content being on #ZeroForever. But he loved the Great Hall. The weekend of 25, 26 & 27 April, Novellus stayed awake for 66 hours in the Great Hall and recruited people for the dorm. He had an advertisement post he would spam the Great Hall with (there were no chat prefects then): “If any of the other newer Ravenclaws are looking for a dorm, or the older first years looking to switch, you are invited to Dorm #15,991: The Bat League. Because WE ARE AWESOME.”

The Bat League is what he had named the dorm in a flash of brilliance (“lel wut?”) and decided on a limit of 21. The idea was to have 20 dorm members to groom towards making this dorm awesome. Dorms like Elyteerin, Riddikulus Riddles, Ethical Eagles and Aureus Room weren’t still as popular back then, with the exception of Curious Claws (#877). Back to that famous weekend, the dorm had around 18 new members by the following Monday. Among that first batch of dorm-mates were Aaron Kirshenbaum, Simon Potter, Anna-Noel Imbriaco, Molina Shutt, Brenna Sharkey, Elessandra Cascabel, Kelsey Douglas, Bruce Wayne (Emily Shakelford), Anne Wellington (Three-Dollar Bill), Nourhan Medhat, Samuel Gonzalez, Nymphadora Lupin, Rhiannon Fleetwood, Amanda Brockman, Lauren, Laurel Davis, Jennifer Serna and Megan Duncan. Anna-Noel, Kelsey, Novellus and Rhiannon are the only “survivors” from that batch today.

The old platform allowed dorm posts, apart from a chat room and a member list view-able to all Dorm members, so members would communicate through Dorm posts. There was no option to like or comment (This feature came with the site upgrade). Novellus’ sister joined the site too, so there was now another Batman, and since the dorm already had Bruce Wayne, that might have been one of the reasons for “The Bat League”. So now that they were 20+1, Novellus divided the 20 into 10 pairs according to their time-zones and made them study buddies. The idea was to get to know each other and Novellus was the +1 who was not going to study anyway. He was happy being the manager. And thus, came about the first dorm spreadsheet, which only had the 21 names and list of the 10 pairs.

Soon, Novellus realized many of them were inactive, so if he wanted to keep the Dorm active, he had to either remove them and start over or bring in more people. The following week, he doubled the size of the dorm, and put together a special spam team (Aaron, Samuel, Simon and himself). The goal was to recruit 21 more people over the weekend. The second batch of dorm-mates had Alanna Teixeira, Annie Lamb, Fiona Drake, Flovilus Xebulon, Kimberley Fowler, Laura DiMitri, Alayla Roix, Tori Hatter, Cie Qyu, Ama Marie, Mary X, Lylia Lee, Onji Thomas, Nicole Leininger, Cristina Trail and Taylor Haynes. They were upto 39 by Friday and they now had the most popular Prefect (Cristina) in the dorm! Novellus continues to remain especially fond of the first two batches because these were people he handpicked, each one of them from the Great Hall, one at a time. Hespoke to them, got to know them and invited them to the Dorm. Each one of them was special to him. He also encouraged them to speak to one another.

Over the week, he renamed the dorm to The League of 42 in a fresh stroke of brilliance (“Thank God!“). Manon van Liempt, Bronze Feather and Dani Ghostie were the last of the first complete L42. And for the first time ever, Novellus closed the Dorm. The first dorm meeting was held on 2nd May, which was attended by 6 dorm members.

Amber, Cristy, Dani, Manon, Rhi and everyone was amazing with their support for Novellus. Two weeks later, he rejoined HiH on 14th June 2014 at 8:51pm IST. He created a new dorm and #24,669 The League of 42 was born. He immediately sent owls to the original L42, requesting to move to the new dorm. Only 16 responded, which meant that in his absence, the rest of them had gone inactive too. For the first time, they were 25 people short and a new dorm with a new number. And thus began the great Initiation Program. Since he couldn’t give much time to the dorm any more because of real life issues, they put together a team for the mass recruiting process. Amber, Cristy, Dani and Rhi were part of The Eagles. Manon was also included later on. Rhi prepared an Initiate Questionnaire. The first new batch included Dana Kreidler, Deanna Brooks, Fadi Royale, Isabel Rhodesse, Janessa Adel, Jens Thienpoint, James Bullard, Kelsey Custodio, Lyra Heathers, Malav Dave, Ronn Mina, Willow Sangue, Alyssa Sparkles, Samantha Flourish, Ana Sanchez Moreno, Markham Weasley, Valentina Murnaghan, Zaira Bellamy and Lyndsie Klein-Palmer. And the fresh names brought life back in the dorm!

Some of them went inactive again and a few more had to leave (or be removed) due to drama back at HiH, and a second round of recruiting was needed and this time Abigail Thurmond, Aethionema White, Laura Jean, Lydia Evans, Clara LeRune, Damian Luthraug, Emily Stewart, Erika Esch, Jonny Diaz, Marie Ferguson, Professor Melanie Silvers, Rae Haston ♛ and Taylor Mote were added. The last round of recruiting brought Annoriel Woods, Caitlin Douglas, Koala Green and Veronica Poppins to complete the L42, and the dorm was closed for the second time.

The 42 members of the Dorm are divided into 6 Quidditch Teams of 7 members each. The teams are Green Goblets (Captain: Isabel Rhodesse), Dynamic Diamonds (Captain: Onji Thomas), International Irrationals (Captain: Veronica Poppins), Rebellious Ravens (Captain: Dana Kreidler), Sleeping Sorcererz (Captain: Lyra Heathers) and Brilliant Brainiacs (Captain: Rhiannon Fleetwood). The teams compete for the L42 Quidditch Cup (awarded at the end of every month), based on House points earned during the month. 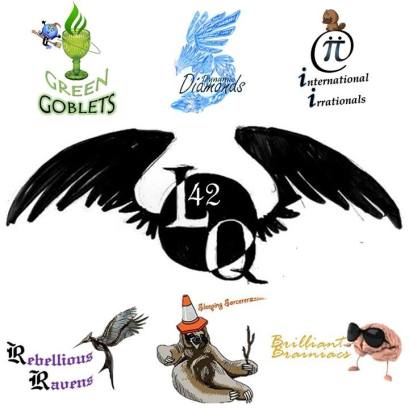 The Green Goblets own the unique distinction of winning the Quidditch Cup thrice (in a row).

Also read: The Shenanigans of 42